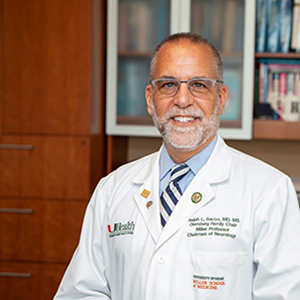 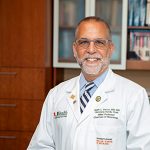 He is the founding Principal Investigator of the 28-year NINDS-funded Northern Manhattan Study, the Florida Puerto Rico Collaboration to Reduce Stroke Disparities, and the Family Study of Stroke Risk and Carotid Atherosclerosis, as well as co-investigator of multiple other NIH grants.  He has also been the Co-Chair of international stroke treatment and prevention trials. Dr. Sacco has published extensively with 726 articles (H-index of 115) in the areas of stroke prevention, treatment, epidemiology, risk factors, vascular cognitive impairment, brain health, human genetics and stroke recurrence. His research has also addressed health care disparities. He has been listed as a Highly Cited Researcher in the top 1% of cited investigators annually since 2017 by the Clarivate Web of Science.  He has been the recipient of numerous awards including, the Feinberg Award of Excellence in Clinical Stroke, the Chairman’s Award from the American Heart Association, the NINDS Javits Award in Neuroscience, AAN Wartenberg Lecture Award, WSO Global Leadership Award and the WHL Daniel Lackland Award.  He has lectured extensively at national and international meetings and received numerous named lectureships.  He is the current Editor-in-Chief of the American Stroke Association journal, Stroke.